I'll start of the discussions here with a bit of a whinge - and some well deserved credit where it's due.

As a Spotting service provider looking after the safety of people working around power lines, I'm constantly aware that most of our clients are usually using a boom or scissor lift (EWP) to gain access at height. Ever since starting in business almost 15 years ago, I've got my name out (in part) by getting a supply of business cards & laminated wall charts into the equipment hire outlets. I bet you had no idea that there's about 70 or so of these scattered around Victoria?

Well - I still try to do that at least once every few years on a rotating basis. I do it in stages & zones when there's no other jobs going, but it's a time-consuming task with many hours of driving. The reaction can be mixed. Some rental outlet owners/ managers are very pro-active and will check a location & refuse to rent if they're not following the correct procedures. I've got many referrals that way. There's also the ones like Mick (pictured) at Citiwest Rentals, Williamstown that has had my poster on the wall for over a decade now. I'm always happy to see them.

But then I still strike the occasional cowboys in the industry. I won't mention names but I do keep a very basic CRM system going and make a brief note whenever I complete a call. This was a relatively small rental outlet in the outer suburbs that WASN'T one of the major national franchises. He was polite enough & I don't mind if they don't stock my cards because of company policy or some other reason, but this guy was completely ignorant of safety precautions and any duty of care.

The conversation went something like this:
Manager: "Oh no... most of our customers are small weekenders & handymen and they don't need spotters."
Me: "Well, don't they sometimes work around power-lines and then they might need a spotter or permit?"
Manager: "Well there's a sign on the equipment to warn them."
Me: "You don't point out the risks & regulations out to them?"
Manager: "Not my responsibility."
Me: <Sigh>

I went back to my car to update the CRM record and guess what... this was the same establishment I called at a few years earlier and I had to explain what a spotter does. At least he knows now, but that still doesn't help an amateur backyarder that won't get properly briefed before renting an EWP here. An accident around power lines is almost certain to cause death or serious permanent injury and there's no warning or second chances.

I'm not angry that he didn't want to stock my cards; I get declined all the time. It's the attitude & ignorance that get under my skin. I worry that there's an accident just waiting to happen, but this guy will just shrug off all responsibility.

Anyway... I've got that off my back. I feel better now. 😕
#mixedfeelings 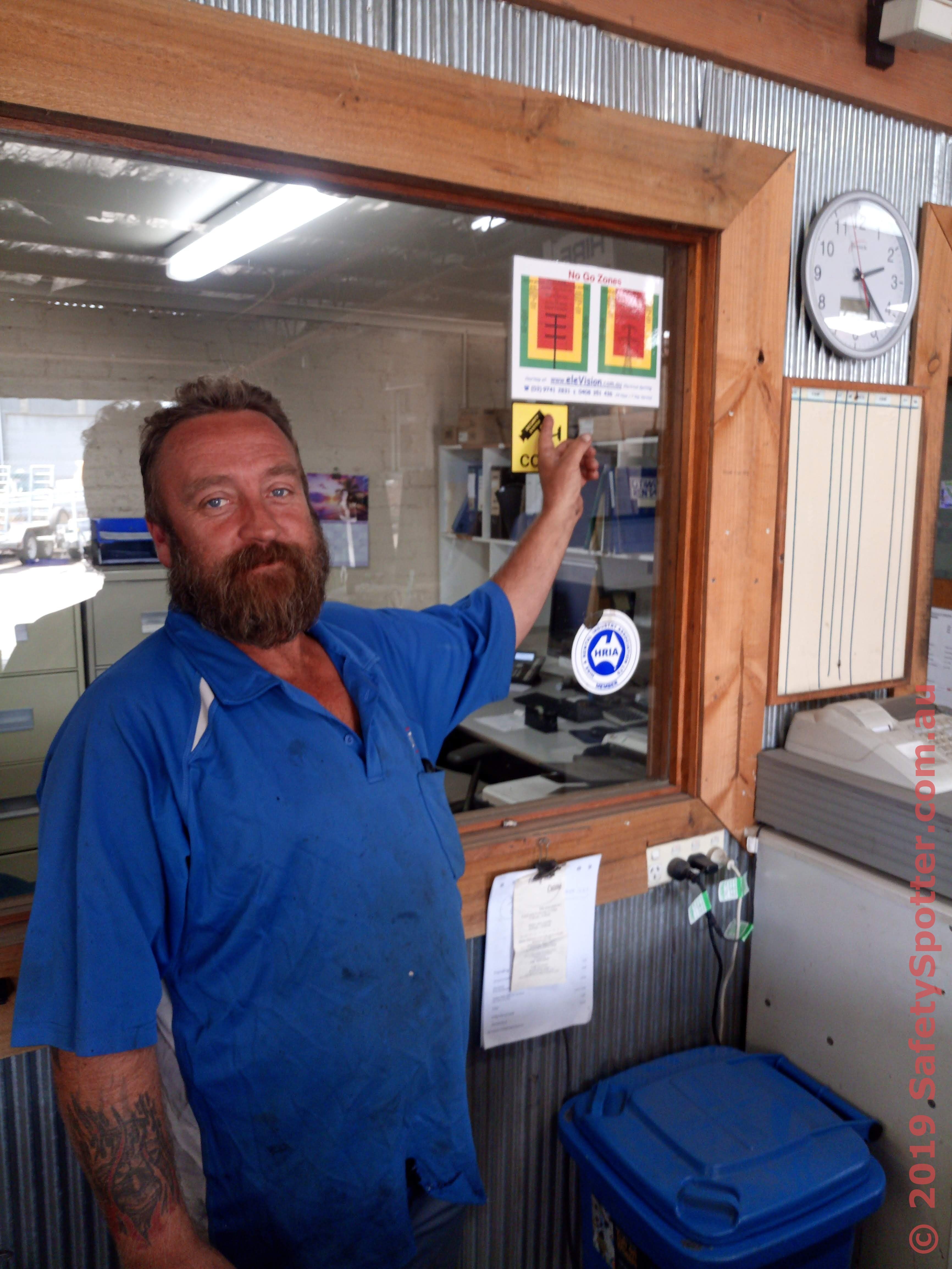 It all comes down to certain smaller established companies not knowing when a spotter is needed, I get numerous phone calls saying "I am not sure if I need a spotter" and that is fine and I am more than happy to sit there and explain it all for them regardless if I get their business. Then I will get a phone call from a demolition company that will be told by the builder that the site will need a spotter and they will try and appoint one of their labourers to be a spotter for the day with no tickets/licences and experience to do it and they will be arguing with the builder about it all.

I find a decent % of the bigger companies will have one or two of their crew as trained & currently accredited spotters. That's great and they're doing the right thing. Ultimately it helps build the safety culture on worksites even if (as a spotting service provider) I don't get any direct business in that scenario.

But the issue they face (depending who's paying for that staff member) is that it nearly always means losing one of their crew for that day on that task. It's much the same as being at home ill from a productivity perspective. Some of the clients I get a lot of business from, have some of their own crew with spotting tickets - but I still get a call when they can't spare them.

My comments initially were more about the rental outlets. They're much more aware of requirements these days than say a decade ago... and they're letting their clients (the hiring public that may not be so well informed) know. But alas, not all of them are doing that.  ☹️

Rental outlets can only push that information so much to the person renting the scissor or boom lift, I had a guy who owns a child care call me up and ask for a quote, from what I was told by him he was going to rent out a boom lift and have it set up on the side road, no traffic management was going to be in place apart from some billiards and himself in place, so he decided to get a smaller scissor lift and sit it inside his property still within the spotter zone 6.4 metres. He told me he won't need my service and I reminded him that he is still within the spotter zone and he paused and said I will just risk it without one. Can only help people so much and if people can take a risk and get away with it then they will try it simple as that.

I'm sure there's a lot of that happening, particularly in the suburban back streets. The cowboys are more likely to take that risk.

That said, some of my work over the years has been after a WorkSafe visit/ audit. Often it's just a drive-by by an inspector, they see the set-up and stop for a closer look. If the SWMS aren't completed properly, proper permits & tickets aren't there or anything risky is being done they get hit with a stop-work order.

It might have been the red flag that got them to stop, but it won't just be a single issue like "accredited spotter required" when that happens. I've seen lists of items to rectify that go into the dozens - second A4 page required.

Well he is on a main road, i guess he is willing to take that risk, i did my part but seems it falls on deaf ears.